Home › About us › Once Upon a Time › The New Synagogue

With the assistance of the Ministry of Religious Services and the Kfar Vradim Municipality and a great deal of help from community members and friends in Israel and abroad, we now have our own building! 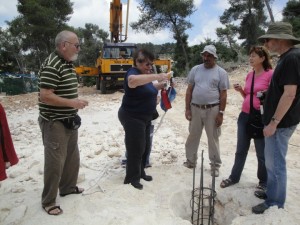 Ceremony of laying the corner stone at the construction site.

The synagogue has been opened in summer 2012.

In February 2011 a group of Conservative Rabbis from the US has visited in Kfar Vradim, but the pouring rains prevented holding a ceremony at the construction cite, so it has been held at the kindergarten cluster, where our community has been hosting its prayers and various activities for about 13 years. It was very moving, speeches and blessing were said, a parchment document was signed and placed in a bottle, which was kept until the construction works began. During the foundation digging, the community members gathered at the new synagogue construction cite and Ruth Druks was given the honor of lowering the bottle into the building’s foundations. 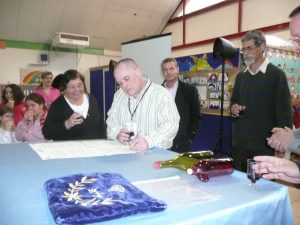 With a glass of wine and blessing “Shehecheyanu”, all have felt that we were witnessing a life-changing moment in our community. The building was being built which was to serve as our home henceforth. No longer shall we make temporary synagogue every Friday and dismantle it back to storage at the end of the Shabbath prayer.

In January 2012 we have once again hosted the Rabbis in Kfar Vradim, but this time construction of the new building was completed, though we have still unable to operate it. An how symbolic it was when together with our guests we have planted the olive tree at the cite. 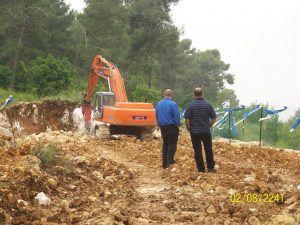 An excavator is digging the foundation for the new synagogue.

The building is named for the Zimmer family, who have helped a great deal in making it happen. It is located as part of the village education area, close by to Amirim mid-school above roundabout #8 (see map for location). 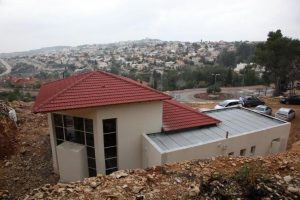 The synagogue building from back, view towards Kfar Vradim.

The building includes a prayer hall, where we are happy to hold prayers, classes, activities for children and teenagers, Brit Milah and Bar/Bat Mitzvah ceremonies at Shacharith or Minkha prayers, putting on Tfilin and more.

In the future we plan to add another hall for holding celebrations or study sessions, which will also serve as additional synagogue space for Yom Kippur and Purim, so we may accommode all who come to join, as well as for classes, NOAM (the Masorti Youth movement) activities etc… 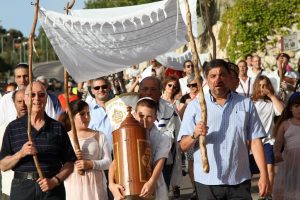 Procession for relocation of the Torah scrolls to their new home along Kfar Vradim streets.

The new synagogue was officially opened May 25th 2012, right before Simchat Torah, when the ark and the Torah scrolls were moved to their new home, with dancing and singing.

The scrolls were brought from the kindergarten cluster to their new home in a festive procession, in which many community members and people from the village participated, accompanied by blowing the Shofars, kleizmer playing and much joy. They were carried through the streets under embroidered canopies, with much singing in which whole families took part, the heavy scrolls passing from one to another. 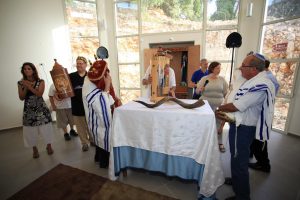 Ceremony of placing the Torah scrolls in their new home.

As the procession arrived to the synagogue, a moving ceremony was held of bringing the Torah scrolls into their permanent home, even if the old ark was still to serve as temporary, until the new ark, donated by the Druks family in memory of Adam Druks, may he rest in peace, one of the first community founders, would be brought and assembled.

The ark is placed in a niche surrounded in windows to the back garden (gardening is planned for future development). 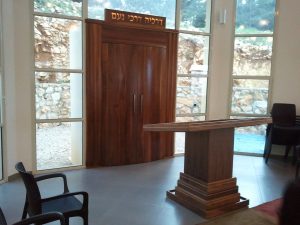 The ark and the prayer table.

The unique ark, dedicated to the memory of Adam Druks and donated by the Druks family, has been designed and executed by Israel Cornfeld, manager of the “Midor Ledor” carpentry workshop in Karmiel. On the top of the ark, and as an integral part of it, a phrase is written lighted from within as a perpetual candle: “Its ways are ways of pleasantness” (Proverbs 3:17).

The perpetual light is dedicated in honor of the Rabbi Zvi Berger, who served as the community Rabbi for 13 years, since its founding in Kfar Vradim.

The new prayer table, donated by the Goodman family and dedicated to the memory of Nurit Goodman Siglar, who passed away February 2013′ was designed by Shimon Siglar and the carpentry performed by their good friend. The dedication ceremony has taken place February 21st 2014 after the memorial service for Nurit, held at the cemetery at 12:30.

The table is unique in its beauty, and has a mechanism for changing its height to allow accessibility for disabled people, young boys and girls and generally people of lesser stature to read the Torah and participate in Aliot.

The beautiful Star of David chandelier.

Above the center of the prayer hall a unique chandelier hangs, fashioned in the shape of Magen David, from the six points of which light blue matte lanterns hang suspended, lighting the hall and filing it in symbolism and mystery.

The chandelier was donated by Shlomit and Gabby Fisch from Kfar Vradim. Shlomit is a glass artist, she designed the chandelier and made the glass parts, while Gabby combined his technical knowledge for the hanging of this interesting and complicated construction.

Dvora Weiss, wife of Rabbi Gerald Weiss, who volunteered to serve as community Rabbi during the summer months of 2012, has come up with a community project for the village women. They have sewn a patchwork dress for a Torah scroll with the words “The Tree of Life” embroidered upon it, from different white-colored fabrics, donated by the village women from their own treasure chests. The dress serves for Torah scroll cover during holiday festivities.

It is also important to remember:

For donations for construction purposes

We are happy and grateful to receive any type of donations.

We invite anyone who is interested to make financial or any other kind of donation to the synagogue to contact:

The community Rabbi, Nathalie Lastreger or the chairman of the organization, Ofer David.

For more details on donations and support click here.

This is also the place to thank all the people of vision, all those who performed the tasks and all the donors, for all the work, the dedication, the energy, the effort put into making this dream come true, up to this day – and henceforth. Thank you for being here, for the ideas and the execution, and the wonderful result.