Home › About us › Once Upon a Time › Rabbi Zvi Berger 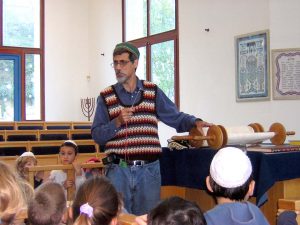 Rabbi Zvi Berger has served as the Rabbi for the Kfar Weradim community for thirteen years ever since he has come to live here in 1998. He has left his job in Kfar Weradim due to personal and family circumstances, and has settled with his wife, Linda, in Kibbutz Hanaton, a kibutz affiliated with the Masorti movement.

Zvi was born and raised in the United States, receiving his Master’s degree in the history of the Jewish people. With his wife, Linda, he has made Alia in 1978, and has worked in various Jewish educational projects and institutions, among them the Alexander Muss High School in Israel and the Jewish-Zionist Education Institutes.

He has graduated from his Rabinnical studies in Beit Midrash in 1996, and was ordained as Masorti Rabbi.

Rabbi Zvi was well-loved and accepted in Kfar Weradim, and has done a lot for the Masorti community and the village people, as we as making connections with our non-Jewish neighbors.

Rabbi Zvi has touched many hearts in Kfar Weradim with his pleasant and graceful treatment of their problems and difficulties in times of grief and in times of celebration, and there are many who remember him well and miss him.